Bridge 5.46 was erected over the Snoqualmie River in 1916.  The steel span portion of the structure dated from 1896 and was 180 feet long.  It was first used in Wisconsin on the Superior Division of the Northern Pacific Railway where it supported heavy iron ore freights for nearly 20 years.  Rising tonnage and larger locomotives required a stronger bridge but in keeping with Northern Pacific practice, and that common on many railroads, the span was dismantled and moved in pieces to Snoqualmie where it was reassembled and used to replace a wooden truss.  It saw heavy use supporting trains of logs and finished lumber until shortly after the Northern Pacific Railway merged with other roads to form the Burlington Northern Railroad.  From 1975 until 1989, the bridge connected the Northwest Railway Museum with the general system of railroads but in 1990 a portion of the structure - a short plate girder section - was damaged by floodwaters.  In 1994 the structure was sold to King County for reuse as a trail.  Other priorities intervened and in May and June 2005 it was demolished and scrapped by the Army Corp of Engineers.

The span was a through-pin-connected Pratt truss, the predominant style of railway bridge construction in the era from 1890 until 1920 and was designed and built by the A & P Roberts Company (merged into American Bridge Company in 1900).  It was nearly identical to the Northwest Railway Museum's Northern Pacific Railway Bridge 35, rehabilitated in 2003/2004.  This bridge design revolutionized the railroad allowing greater tonnage and a significant increase in locomotive size over earlier designs.  Its modular design also sped fabrication and construction, particularly in remote wilderness areas.  The design was itself superseded by even stronger bridge construction to support the continuing increases in train tonnage and locomotive size.  For the Northern Pacific Railway, that was the arrival of the Z class and other large motive power pushing total engine and tender weights to 500,000 pounds and beyond. 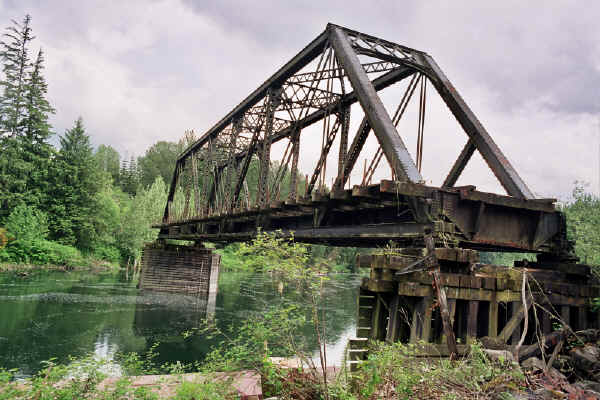 Alone and without rail, this classic Pratt truss awaits the scrapper's torch in May 2005 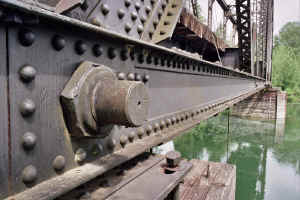 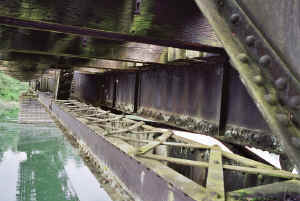 Large steel pins connected individual modules together.  Each module was small enough to ship on a railway flatcar.  The modules were assembled in a Chicago factory. 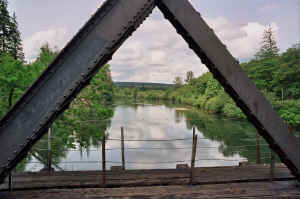 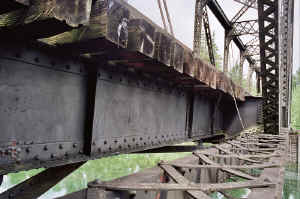 Latticework chords at left and box girders at right were significant structural features. 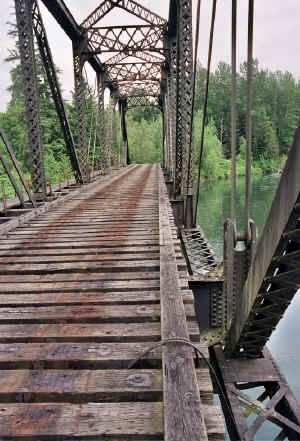 Rail has been removed from the deck. The elegance of the design remains for a few more days. The timber deck absorbed vibrations (shock) from a train helping protect the steel structure. 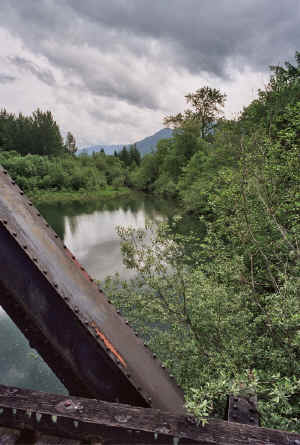 One of the striking qualities of any bridge is the environment in which it is located. Few locations can rival the Snoqualmie Valley but this beauty had a cost: railway builders faced many expensive river and valley crossings. 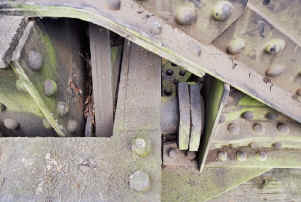 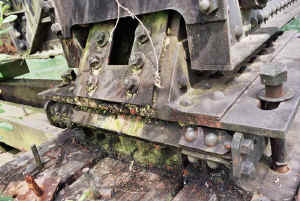 Intricate components complete the first and last chord of a pin-connected truss. 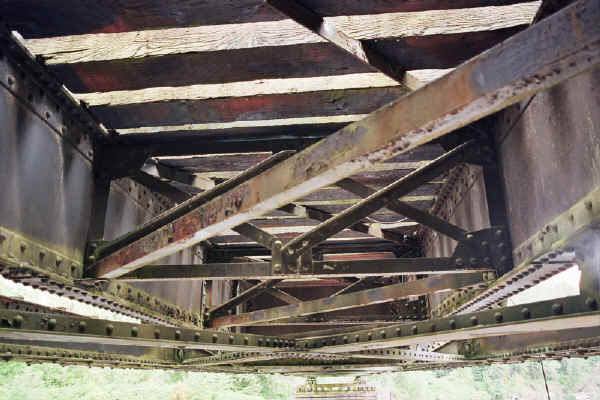 A seldom seen sight on this bridge was the bracing in the plate girder sections, below the timber deck. 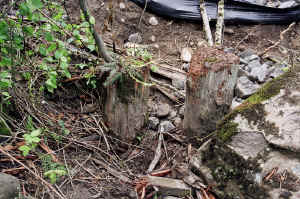 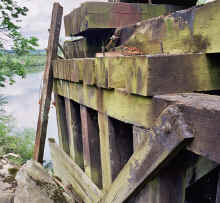 Evidence of earlier trestle construction, perhaps from the false work used to erect the truss in 1916, remained in 2005 and appears on the left. On the right, the bridge foundation, a series of square piles driven to refusal, remained sound to the end.  Creosote-treated old growth fir can perform well over a very long period, even in a river channel.